This is my current favorite breakfast.  I can’t claim it as my own though; it’s Kris’s creation.  Breakfast Chile Rellenos are out of this world.  Charred poblano peppers stuffed with cheese, bacon, eggs, onions, and mushrooms… I mean, it’s like a gourmet breakfast at a fancy restaurant.  And I eat it in the bathroom while I do my makeup.  I try to sweet talk Kris into making me breakfast on a daily basis. He works from home, I have a 30 minute commute…. It takes me an hour to get ready in the morning, he doesn’t have to get ready in the morning… Makes sense, right? I’m successful about half the time.  A few weeks ago he created these breakfast chile rellenos with poblanos from our garden, and I’ve since been requesting them every morning. 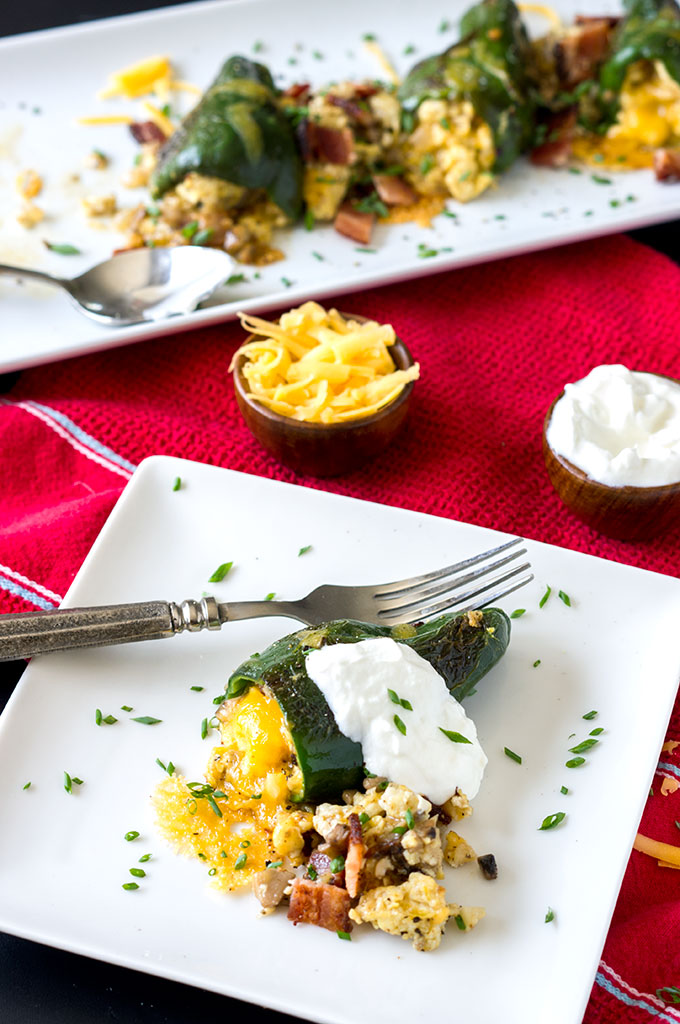 The garden is producing like crazy!  Seriously, we can’t keep up.   Every other day or so I go out to the garden, wander around and pick whatever looks ripe, and then we eat those veggies over the next few days.  Lately we’ve been eating lots of peppers, cherry tomatoes, basil, cucumbers, zucchini, eggplant, and onions.  I also made my first batch of sauerkraut this season from our cabbages.  Expect some eggplant recipes coming soon! 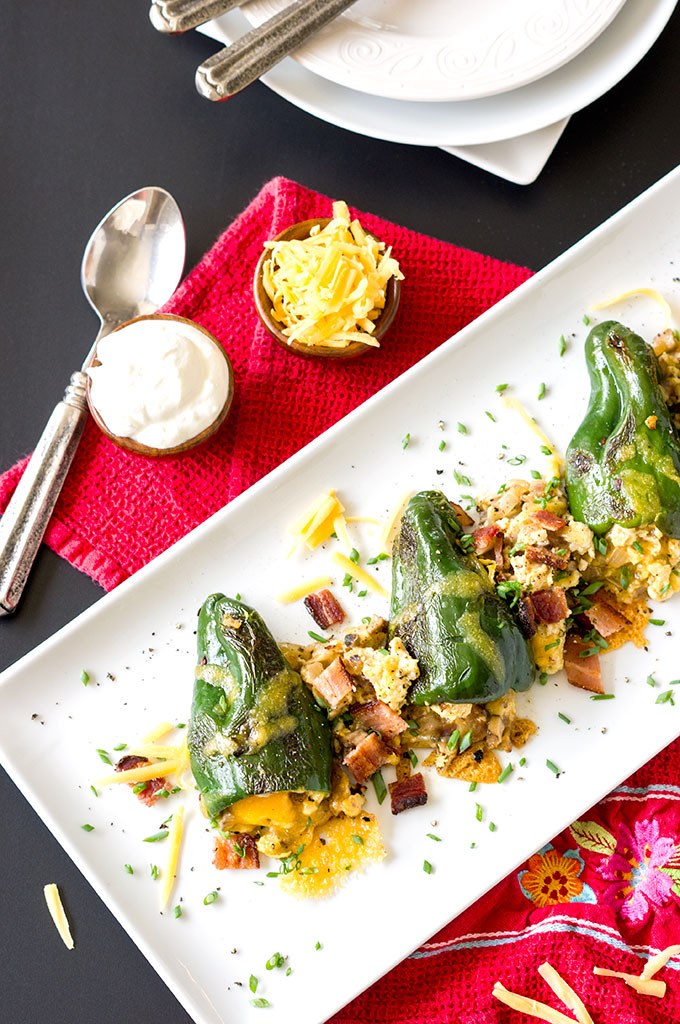 The poblano pepper plant is over two feet high.  It’s twice as big as all the other pepper plants.  I have no idea why it’s dominating while some of my other pepper plants look a little pathetic.  This might be the first time we’ve planted a poblano and maybe that’s just how the plants are….I don’t know, but in any case, I’m happy to have an excessive amount of poblano peppers for Kris to make me Breakfast Chile Rellenos all summer long.  We also have bell peppers, jalapeños, Anaheim, Big Bertha, Thai chile peppers, habaneros, Hungarian hot peppers, and Tabasco peppers.  The Tabasco pepper plant is just barely starting to get a few peppers, it’s way behind the others. 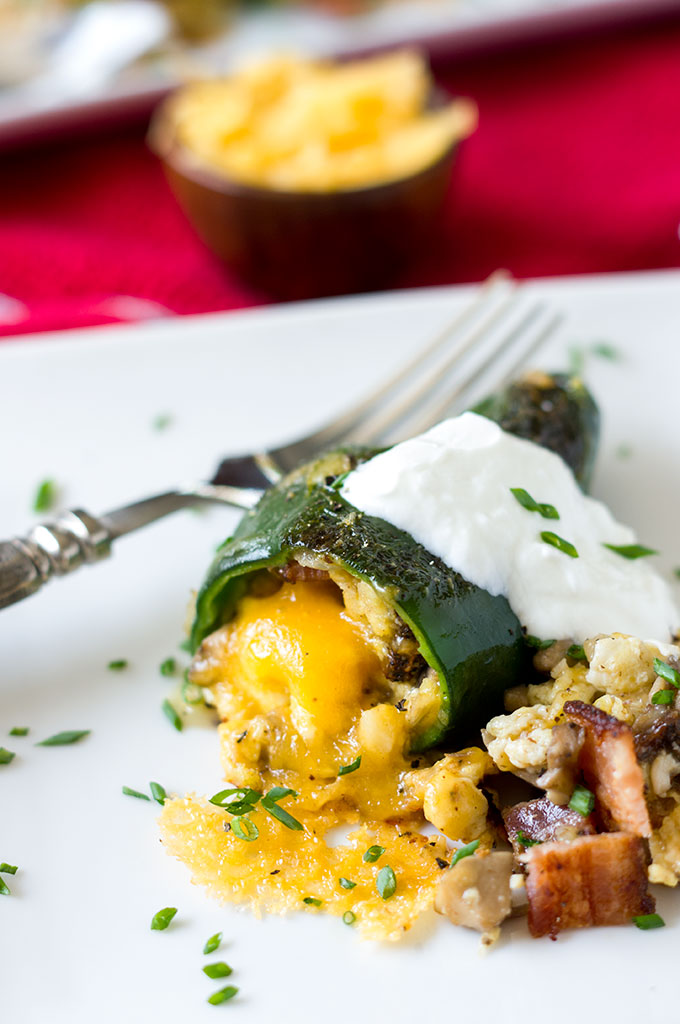 You can use any type of peppers you want to make Breakfast Chile Rellenos, they’d just be called breakfast stuffed peppers.  Poblanos are traditionally used for Chile Rellenos and chile rellenos literally means “stuffed peppers”.  For this incredible breakfast, we charred the poblanos in a cast iron skillet but you could also roast them in the oven. After the poblanos are charred, you cook the filling – in this case, bacon, eggs, onions, garlic, and mushrooms.  Then stuff the peppers with cheese and the egg filling.  Finally place the peppers back in the skillet for a few minutes to reheat.  Top with sour cream and enjoy! 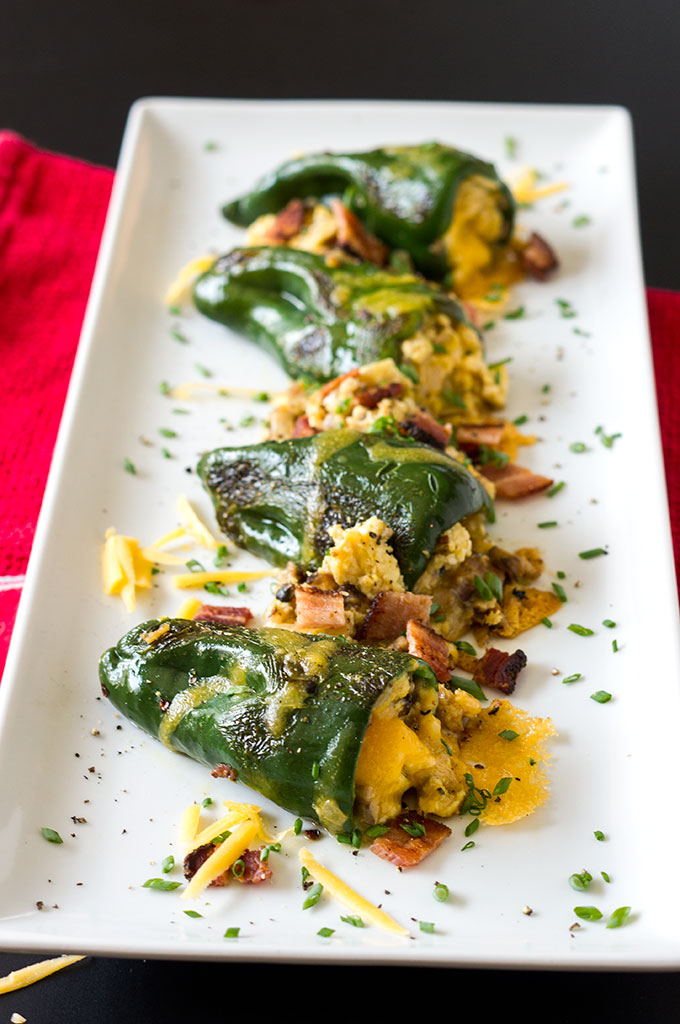 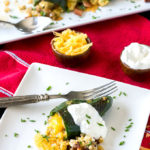