When I made the decision to eat low carb, I had a few panic moments of potential food deprivation. Pizza is one of those foods that made me seriously question the low carb lifestyle.  That is until I discovered “fat head” pizza crust!  This crust is a lifesaver, literally.  Kris would not be able to survive in a household where pizza was off limits. Honestly, I probably wouldn’t either….  Pizza love is real.  And it’s not that we never, ever eat normal pizza.  We do, just not very often.  With fat head pizza crust, pizza has been making many more appearances in our house.  And this delicata flatbread with the fat head pizza crust is one of my best creations yet! 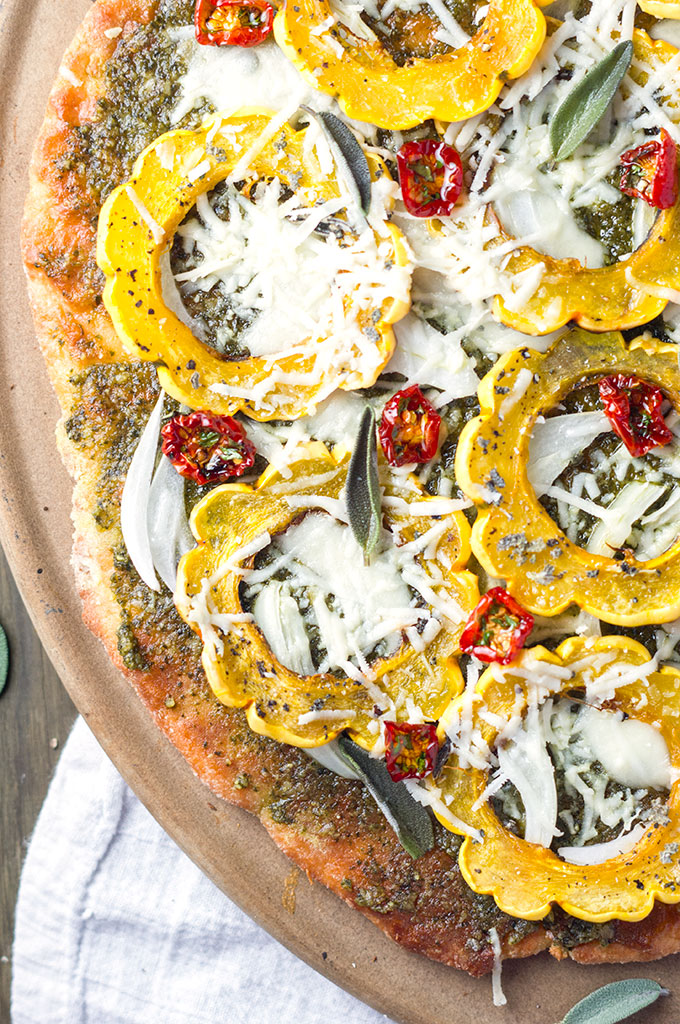 First things first, fat head pizza crust is a game changer.  I’ve tried zucchini, cauliflower, broccoli, and eggplant pizza crusts.  While all of these veggies make good pizza crusts, they are still a veggie pizza crust.  It’s just not the same as a bread crust.  You can’t really pick up the veggie crust pizzas and eat them like pizza.   And I’m not a fan of eating pizza with a fork.  Pizza is a finger food. 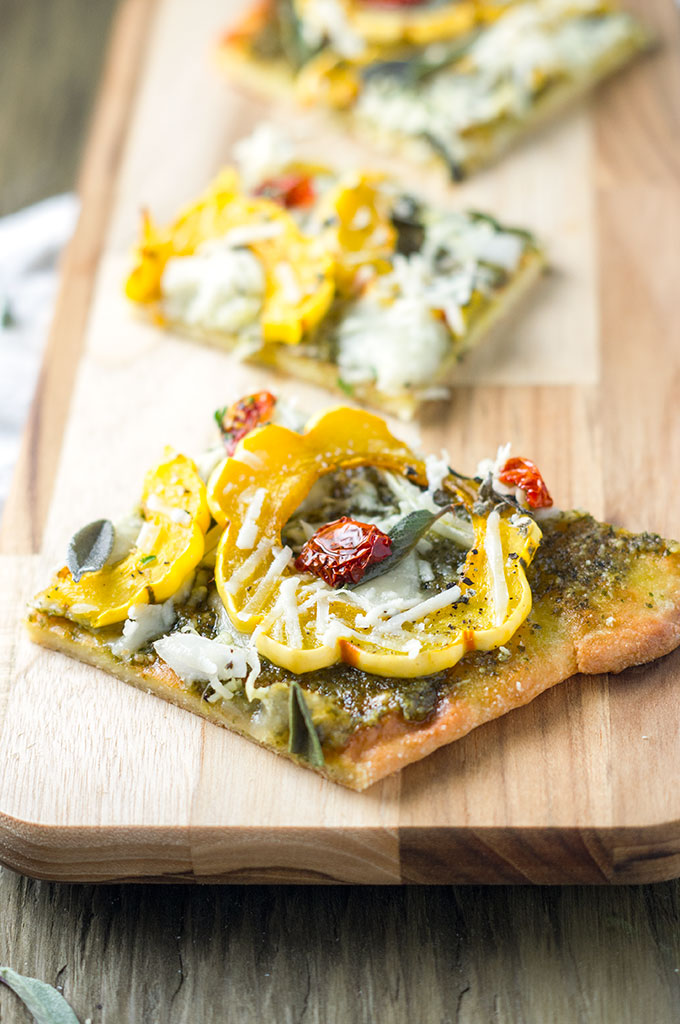 The fat head crust is made of melted mozzarella cheese and cream cheese, almond flour, an egg, and seasoning.  It’s essentially a cheese crust.  But it’s not overly cheesy.  The texture resembles a thin crust pizza, and it’s study enough that you can pick it up and eat it with your hands.  I had to melt the mozzarella and cream cheese over low heat in a saucepan lined with parchment paper because we don’t have a microwave…. this is one of those times where I really wish we had a microwave… 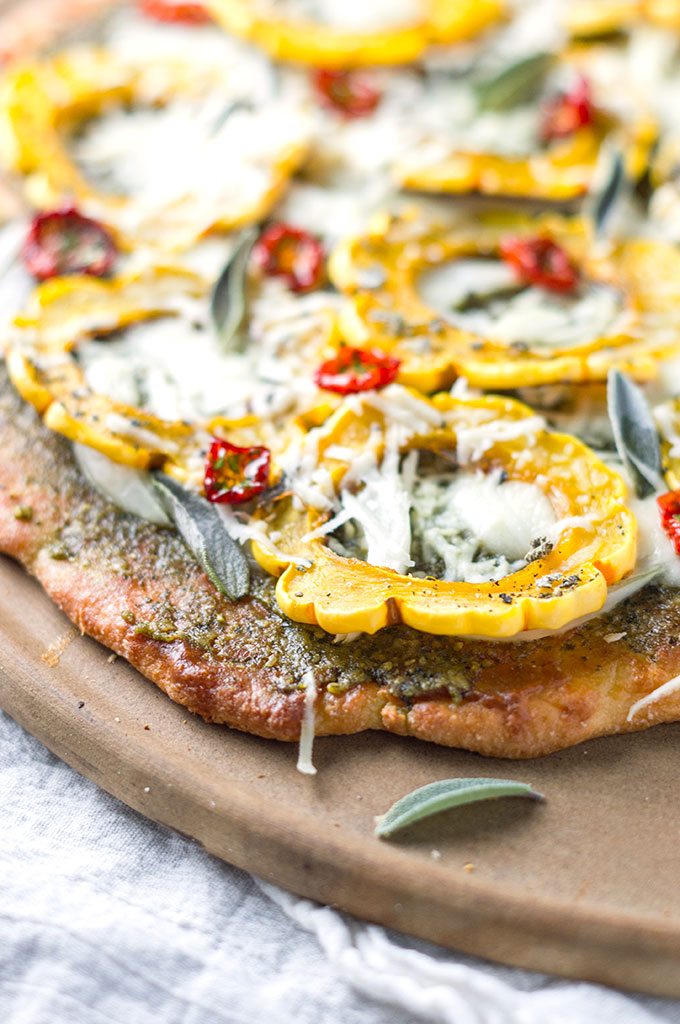 Now for the toppings.  You can use fat head pizza crust like any normal pizza crust.  We typically go for a supreme-type pizza.  My only suggestion would be to use a little less cheese as a topping as the crust is already made of cheese.  Easy to get carried away with cheese….not that there’s anything wrong with an excessive amount of cheese on pizza, haha. But a super cheesy pizza with a cheese crust…. ehhh, might be a bit much….

I went for a fall-theme with this flatbread.  Winter squash is one of the best things about the cooler weather.  And delicata squash it my new favorite – no peeling!!!  I absolutely despise peeling butternut squash; it’s the worst thing ever.  Delicata squash has a very thin skin that you can eat when it’s cooked. 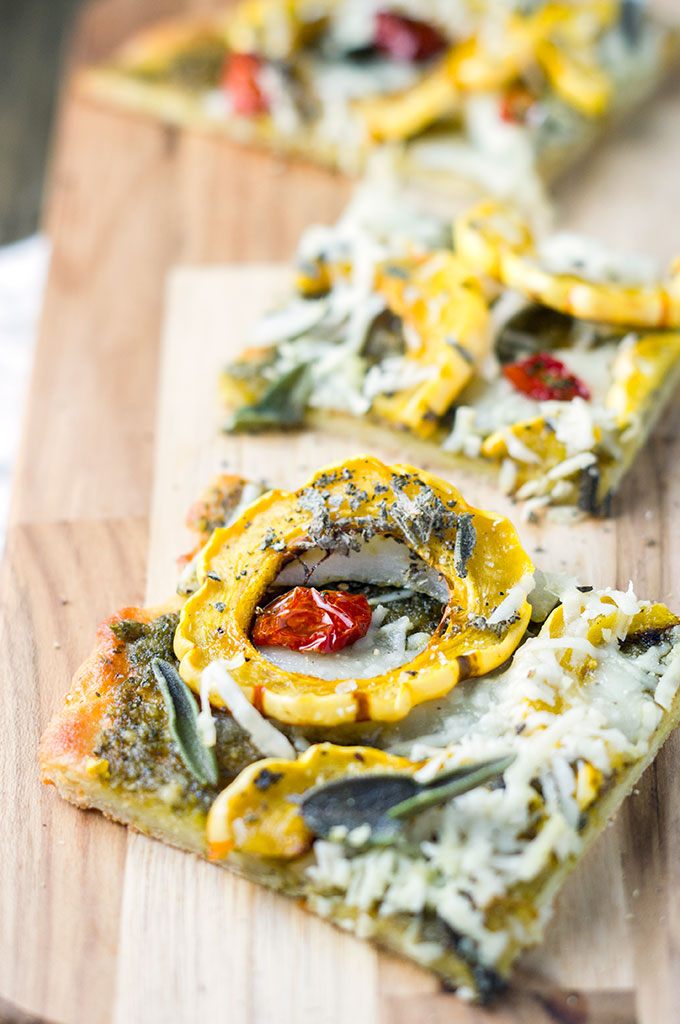 For this flatbread pizza, I sliced the delicata with a mandolin and baked it with olive oil, salt, pepper, and sage.  Then I used my homemade pesto for the sauce, and topped the pizza with a mozzarella, parmesan, cooked delicata, onion, fresh sage, and homemade sun-dried tomatoes.  We ate this as an appetizer but it’d work as a meal. I think chicken would be a good protein to add, or maybe sausage.  However you decide to make this delicata flatbread with fat head pizza crust, it will be amazing.  Even if you just use the fat head crust with your favorite pizza toppings, you’ll love it! 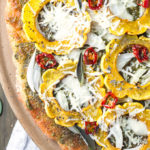