I know I’m posting a Memorial Day recipe a day late.  Couldn’t be helped.  We went to McCall for the weekend, came back last night, and then I had to work.  I did actually think about getting this post ready before we left but I got busy and ran out of time….thinking about it is as far as I got.  Luckily this red, white, and blue faux potato salad is perfect for all those upcoming summer barbecues!   The secret (if you couldn’t already tell…), is that it’s a cauliflower potato salad with blue cheese and red onions! Yay! 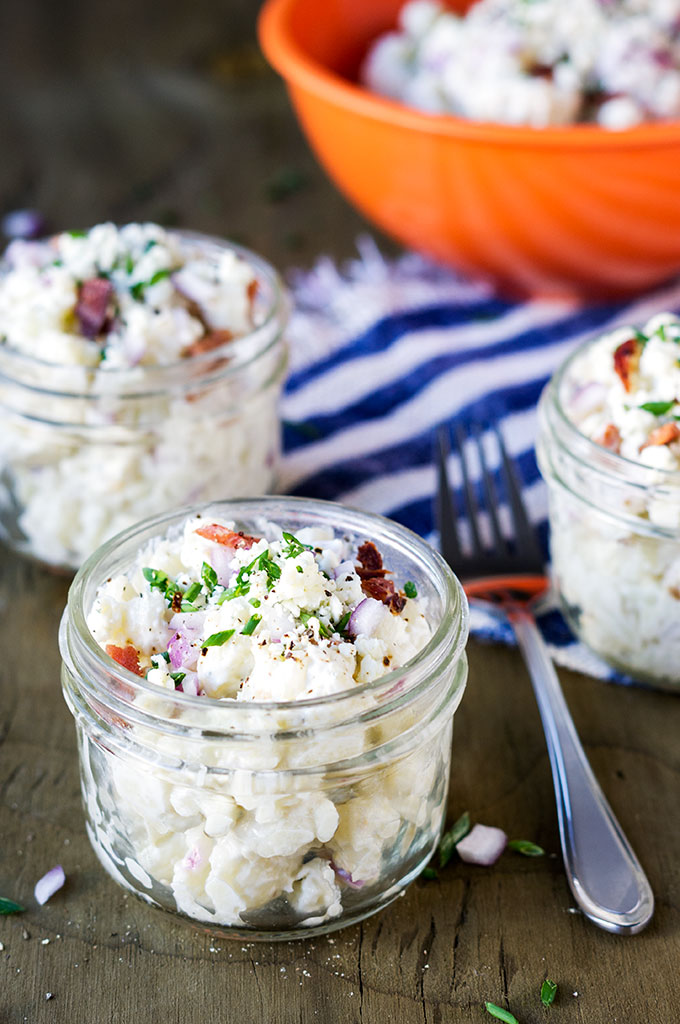 The inspiration for this salad comes from the worst summer job I ever had.  I won’t name names, but one summer I worked in the deli at a grocery store.  I sliced meats and cheeses, deep fat fried so many frozen foods, made salads and sandwiches, rotisseried whole chickens, and sorted, battered, and fried chicken pieces (breasts, thighs, legs, wings).  I didn’t eat chicken for months after that long, horrible summer….handling raw chicken for eight hours is too much for me.  And I would have nightmares about cutting my fingers off in the meat slicer.  The only good thing about working in the deli was the red, white, and blue potato salad.  I couldn’t get enough of it!  Red potatoes with crispy bacon in a creamy blue cheese dressing, yum!  It was by far my favorite thing in the whole deli. 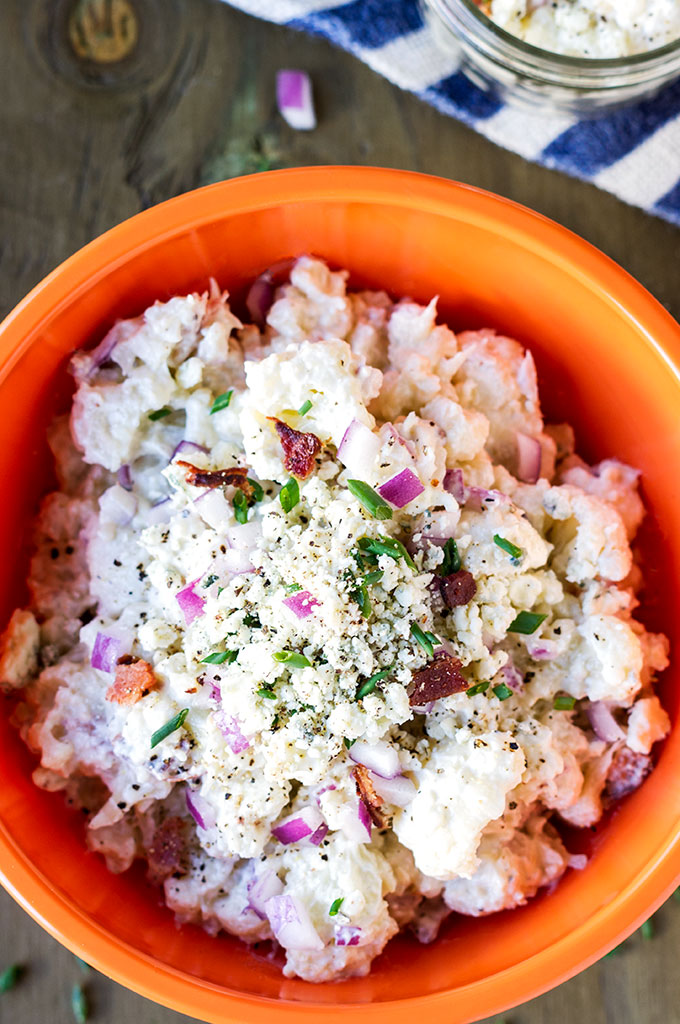 So I decided to start making it for myself at home, but to keep the carbs low and increase my veggie intake (and enable myself to consume a very large portion), I substituted cauliflower for the potatoes and used red onions instead of yellow onions to ensure I still had the “red”.  I still used bacon, of course, bacon makes everything taste better.  I also added in sautéed garlic and used Greek yogurt for half of the dressing.  The other half being mayonnaise, olive oil mayo.  I thought about using sour cream but was worried the combination of sour cream and blue cheese would be too strong of flavors. 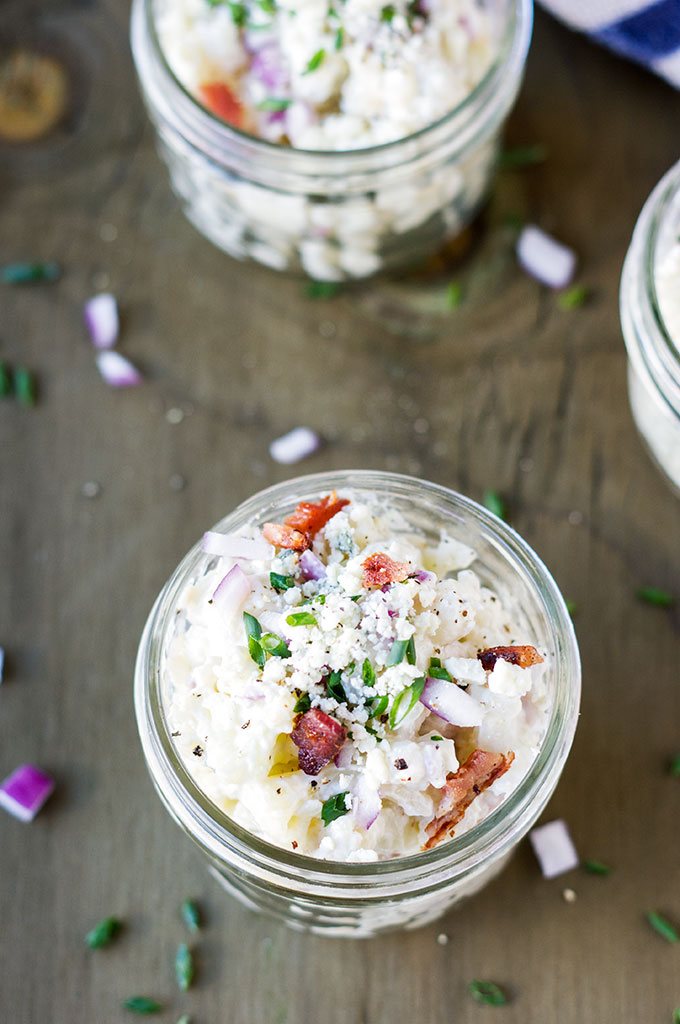 You have to believe me when I tell you this red, white, and blue faux potato salad is amazing.  I will be taking it to all summer gatherings.  I took it to my in-laws for dinner, and it was a big hit, thank goodness!  I was a little worried because I did try to trick them and left out the part about it being a “faux” potato salad…but they’re too smart for me and figured out it was cauliflower instead of potatoes right away.  And they still complimented it and went back for seconds even after knowing I tried to trick them.  Kris really liked it too, and I’m direct quoting, “I think I like it better with cauliflower than potatoes.”   Score!  You know you’ve done something right when your husband likes your version better than the original, and come on, it’s hard to beat a good ol’ potato salad, but this red, white, and blue faux potato salad did it! 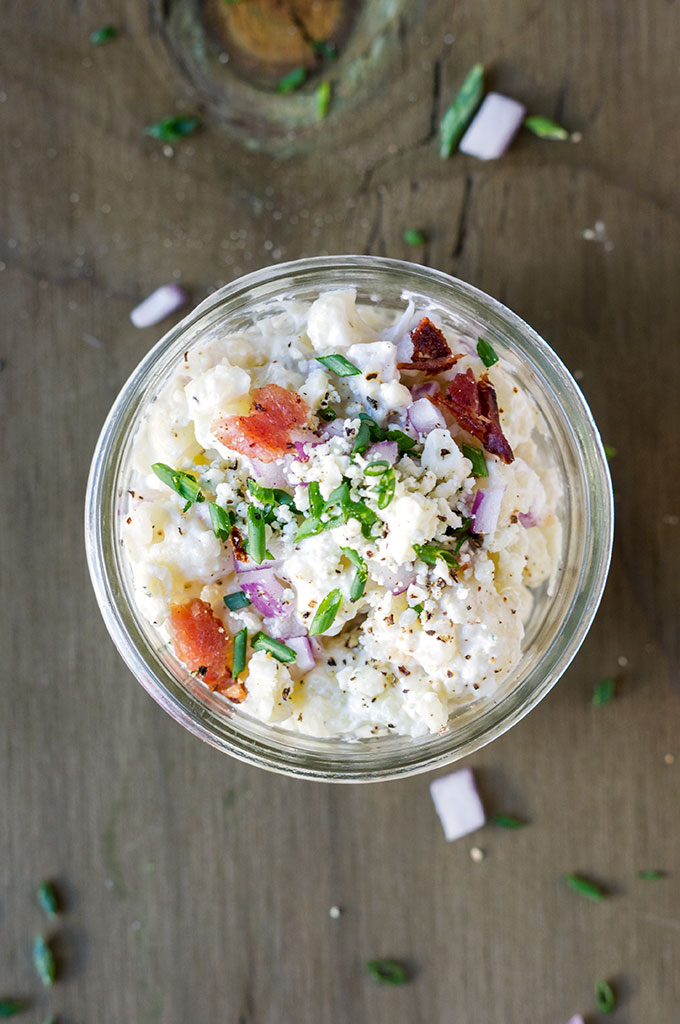 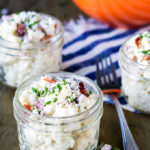