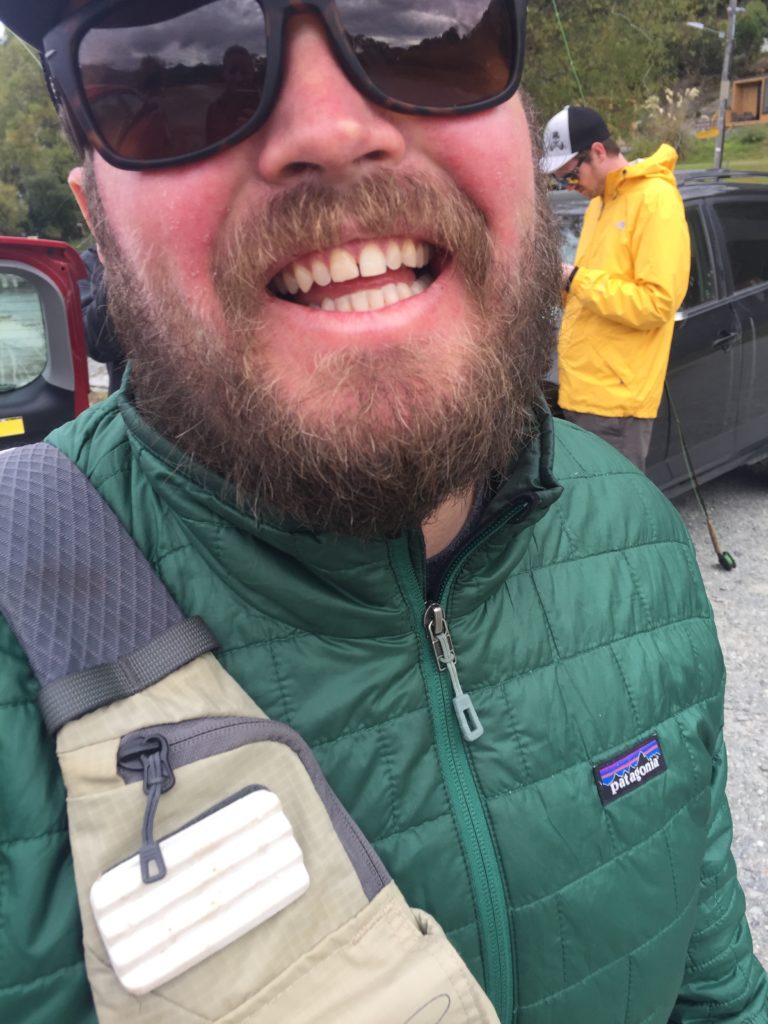 Getting ready to fish in New Zealand March 2017

I haven’t gotten in a routine yet.  I can’t quite figure out my new normal.  I’ve been working five days a week, which I know isn’t really that big of a deal.  Most people work five days a week, but Kris let me work part-time. I haven’t worked full-time since before I was married.

I’m used to working two or three days a week and then doing housework or yardwork the rest of the time.  Or working on a blog post – but mostly just for fun. In January I started my own online nutrition private practice but it wasn’t really up and going when Kris died, and I haven’t really had the energy to put a lot of effort into it, so it’s just out there, floating around on the internet.


My old weekly routine with Kris was to go to bed by 10pm so we could get up and go to the 6am or 7am CrossFit Class and then I’d go to work or do housework or do whatever I wanted.  Whatever I wanted usually consisted of “bugging” Kris while he was working. Kris worked from home and I often ended up hanging out with him in his office, even if I was working on my own things, we were still together.

I used to barely make it to work on time because Kris and I would start talking as I was on my way out the door.  I always went into his office to give him a kiss goodbye before I left for the day. A quick kiss and an “I love you.” Then one of us would ask the other a question and next thing I know we’d been talking for 15 minutes, and I was late for work.

We didn’t really text that much during the work day.  Although I’m pretty sure Kris texted his friends all day long.  When I got home from work, my routine was to go into Kris’s office, sit on his lap, and ask him about his day.  I had a series of questions that I’d ask him: “How was work?”, “Any epic group texts or Instachats?”, “Did you read any interesting articles today?”

I’ve said before that Kris and I talked about everything.  We didn’t always have the most in-depth conversations, but we talked about things.  Actually, the only thing we never talked about was how we’d want to be buried. I don’t think we ever discussed being buried or cremation, at least not that I can remember.  When I was asked if I wanted Kris’s body cremated, I said “No” without any hesitation. I’d thought about cremation before, but never seriously, I just knew I didn’t want Kris cremated when I was presented with that option.  I couldn’t bear the thought of his body being burned in Israel and then his ashes being sent back to me. I mean, I still struggle with the fact that his body had to be shipped back to the U.S from Israel.

I miss talking to Kris. He was so smart.  So quick with his responses. Believe it or not, he read a lot.  He wasn’t much of a reader when I met him but over the years he started reading more books and reading online articles about anything from conservation to politics to rafting to current events to sourdough bread to various opinion pieces.  I could ask him about almost any story I’d head on NPR and he could tell me about it, and not just a one-sided point of view. He’d usually read articles from both sides and then formed his own opinion.  Or he’s just present me with the facts and let me make up my own mind. Or I’d have an opinion about something and he’d point out every single flaw in my thinking and every hole in my logic, just to be a contrarian.  He challenged me. But at the same time I knew he respected me and I respected him.

This new routine, I feel like it’s temporary.  Like I haven’t accepted that it’s just me, a dog, and two cats.  I did a lot of the house work and yard work before Kris died, but then I was only working part-time and had plenty of time to get things done around the house.  I feel like I’m behind on everything. But then the house stays cleaner with it just being me, less laundry, fewer dishes. And thank goodness for the Roomba. I’ve been running it every day and that simple act makes me feel like the house is so much cleaner.  Kris got me the Roomba for Christmas. He named it Room-bro, so when I ask Alexa to start cleaning, she says, “Room-bro is now cleaning” and it makes me smile every time.

I will get into a routine, it’s just been rough and I haven’t adjusted yet.  I’ve been picking up some extra days and I got a PRN dietitian job with a home health and hospice company.  So I’ve been doing orientation and my schedule has been random. It’s finally more normal this week and should be more of a set schedule from now on, thank goodness.

But it’s hard.  Everything I do that I have to do because Kris died is hard – working more, calling the cell phone company, calling about getting Kris’s accounts transferred into my name, talking to lawyers.  I frequently end up crying when I call customer service because it’s all just so frustrating and so much paperwork.  Feel like I’m going in circles. Or fucking AT&T tries to get me to sign-up for Direct TV every time I call. And no one can do any of the paperwork for me or even help me with it.  The amount of paperwork when someone dies is ridiculous, something you never, ever think about.

And time just keeps going.  My heart knows he’s gone, but sometimes my brain forgets.  I try to stay busy, but Kris is always, always in the back of my mind.  I can be walking down the hall at work or driving or talking to someone and the realization that Kris is gone will hit me out of nowhere.  Like my subconscious just decides to acknowledge his death for a brief moment and I think, “Kris is gone. You will never see him again.” The finality of those two sentences is so harsh.  But it’s my reality.

We talk about death so casually in our society.  “I’m going to die if I have to ____” or “That’s going to kill me!” or “I’m going to kill her for that!”  I’ve caught myself about to stay those things, or similar statements. But then when someone is actually gone, we don’t know how to handle it.  We want to make everything better. But we can’t.  It takes time.

Why do some weeks seem to fly by and others just drag on forever?  Why is it so easy to focus on the negatives in life and let that consume us? How different would our lives be if we were more grateful for just being alive every day?  You only get one shot at making Thursday, May 16th, 2018 a good day. There are no do-overs. Stop thinking about “some days”. The little things aren’t worth the stress.  Who really cares if your house is clean?

I think what really matters is our relationships with people, how we treat others, the connections we make.  And that’s why I’m working on getting into a routine. So I can get all the shitty, boring, adulting, functional-member-of-society stuff taken care of and still have time to hang out with people without stressing about my to-do list, to try to live out Kris’s New Year’s Resolution to be more social.  A work in progress but I’m getting there.