Keep reading for my full breakdown of how to make a wedding taco bar for 150 people!

My sister, Nikki, got married this past weekend to the love of her life, Jared. It was a beautiful wedding.  And it was a lot of work! I did the taco bar for 150 people. Fact of the matter is that family weddings are always a lot of work. My duties included being the Maid of Honor, catering the wedding, and making the cake. Needless to say, I survived and have now fully recovered. 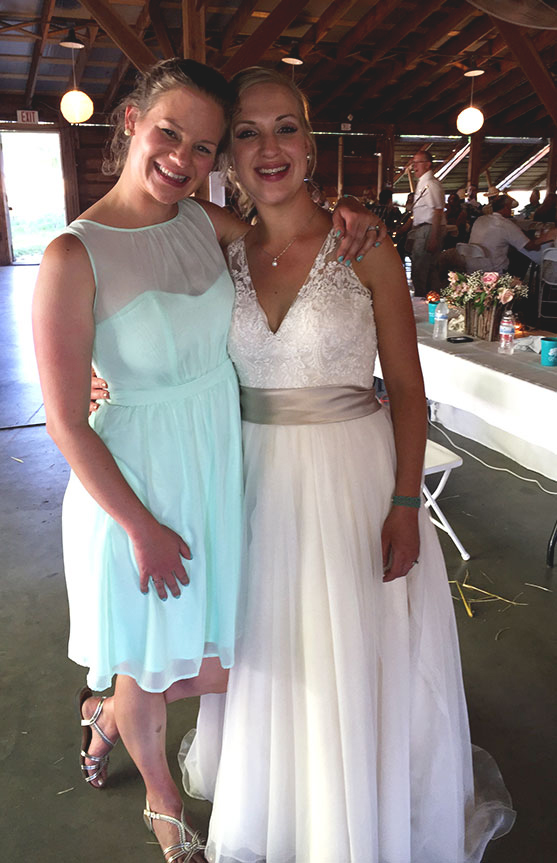 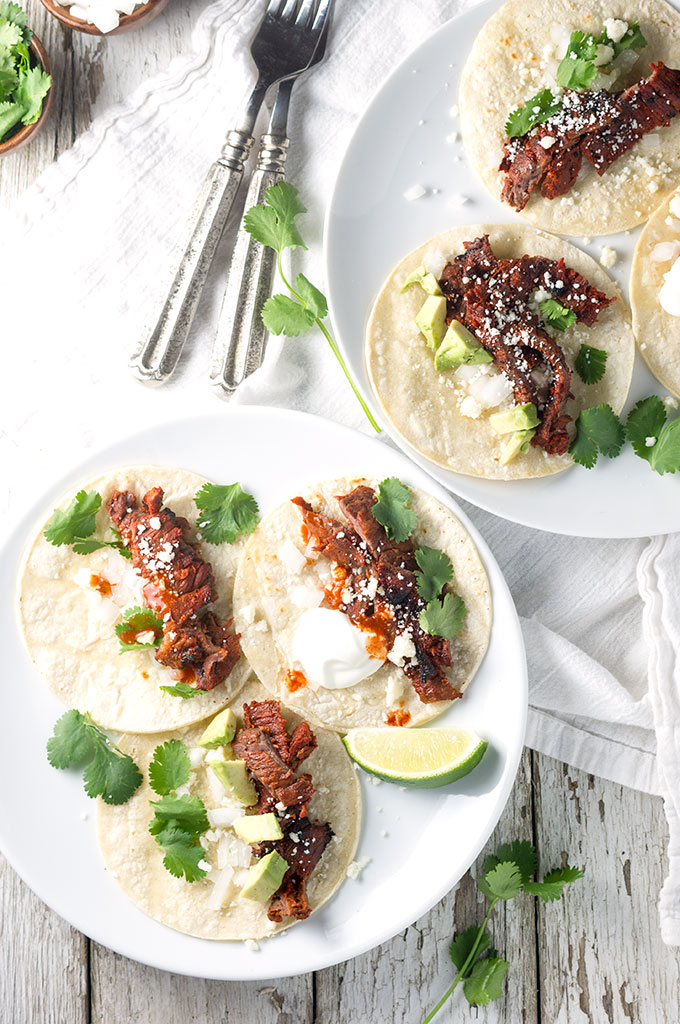 Don’t mind the pictures, not the best.  I had planned on bringing my camera but in all the wedding madness left it at home. I took all these pictures on my iPhone, and I didn’t even do a very good job. I was literally running around like a crazy person and kept forgetting to take pictures, and the pictures I did get aren’t the greatest…. I do wish I had taken some better pictures of the buffet line of the taco bar and all the food and my plate full of tacos…..

I did a fair amount of research to figure out how much food to plan for the taco bar for 150.  I dug out my Food for Fifty book and did lots of Google searches.  The full menu included chips and salsa for an appetizer during the cocktail hour and then a taco bar for the dinner. 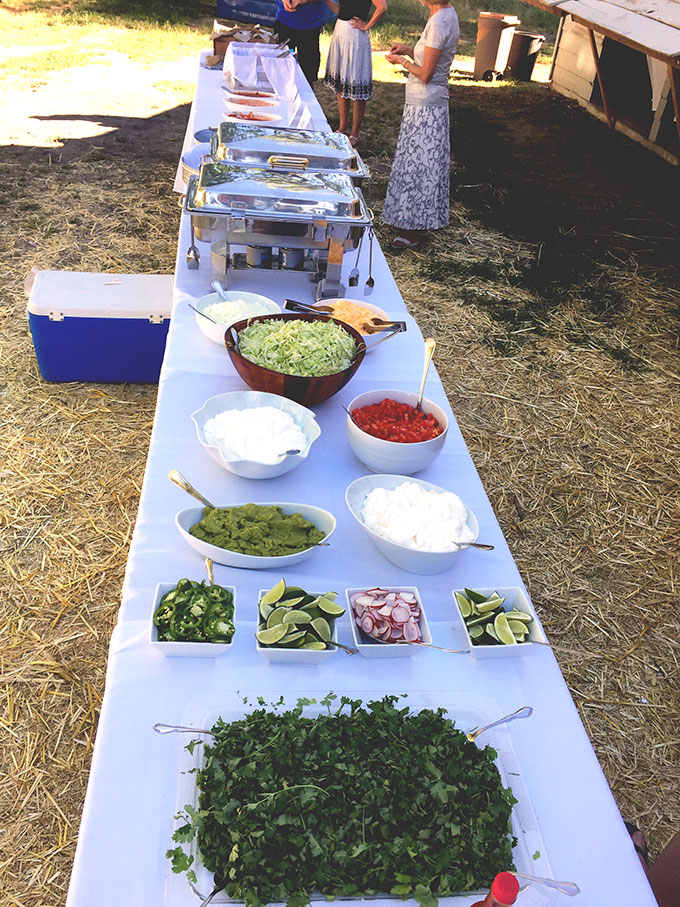 On the Wednesday before the wedding, I borrowed catering supplies and picked up all the linens, then my sister, Nikki, and I went and got gel manicures and pedicures. I started cleaning the house that night to get ready for my cousins to stay with us.

On Thursday I got my hair cut and then went shopping for all the wedding taco bar food. I bought most of the food at Cash and Carry but also picked up a few things at Costco and Winco. We got all the meat from a local Mexican food mart that is also a butcher. I baked the cake on the Thursday night, wrapped it in plastic wrap, and frozen it. 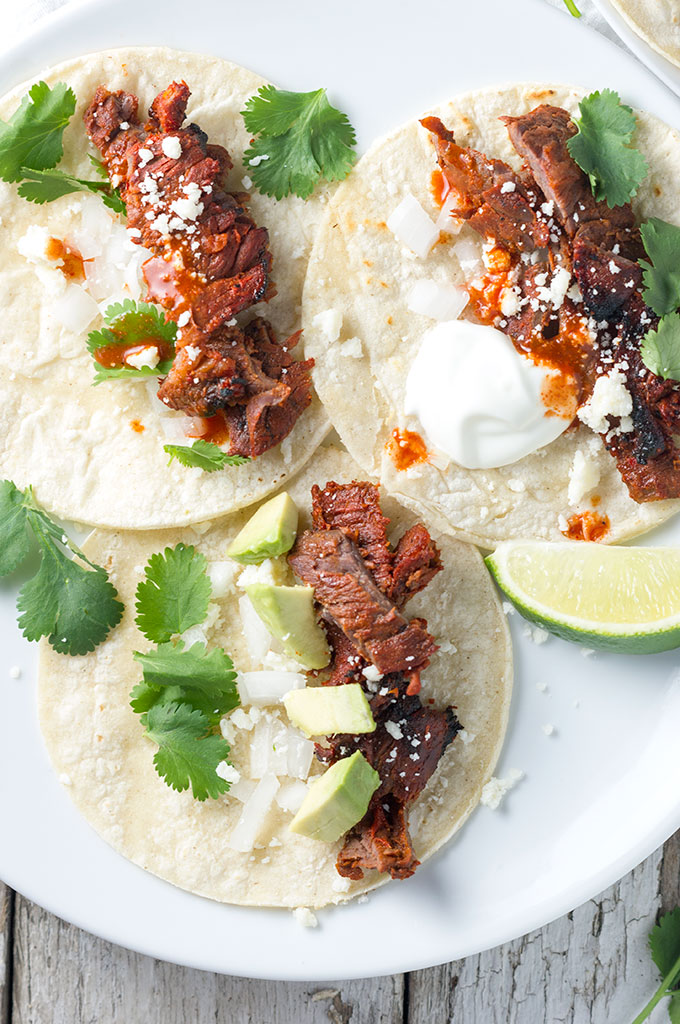 On Friday, I made a second cake as backup just in case…. We also prepped all the vegetables and went to the rehearsal dinner at my parents’ house. Then on Saturday, the wedding day, I made the buttercream frosting in the morning and decorated the cake. Kris and my cousin’s husband went and got propane and charcoal for the barbecues and borrowed another barbecue from my father-in-law. 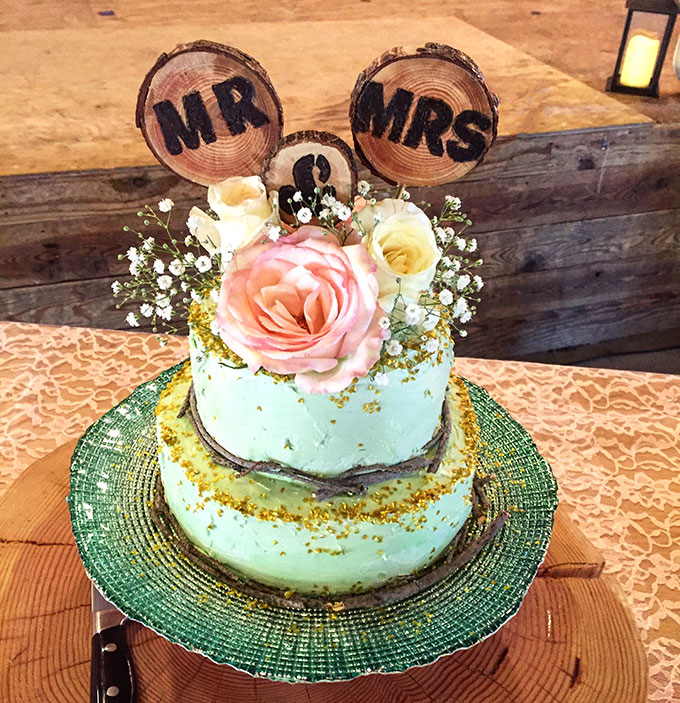 We arrived at the wedding venue around 2:45pm, wedding started at 4:15pm, plenty of time if I was only doing the taco bar, a little tight on time for being a bridesmaid…. I was planning on getting myself ready at 3:15pm… Originally I was thinking we’d get there by 1:30pm, maybe 2:00pm at the latest to give myself over an hour to help set up the buffet for the wedding taco bar for 150 and to start the beans and rice.

Well, we were behind, of course, and I had about an hour of extreme panic. Luckily my cousins and Kris remained calm, gave me a beer, and kicked me out of the kitchen to go get ready while they took over the beans and rice.

I bought dehydrated refried beans and parboiled rice. My cousin and Kris sautéed onions, green bell peppers, and jalapeños to add to the rice along with canned, diced tomatoes. The beer helped calm my nerves somewhat…

While my family cooked, I did my hair and makeup in record time and just barely got myself together for the ceremony.  And then I forgot the ring…total fail!  Yep, left the ring on the table in the dressing room.  After I walked down the aisle, I stepped forward and told my mom I had forgot Jared’s ring!!!

Luckily my mom has arthritic ring fingers and wears a large silver band, so she discreetly passed me her ring and that’s the ring that my sister put on Jared’s hand during the ceremony!  We ran and got the real ring right after the ceremony.

I had to take pictures after the ceremony so Kris and my cousins ran back to the kitchen and barbecues to start cooking. They also set out the chips and salsa for the cocktail hour. The other mishap was that I forgot the tortilla chips at my house…. I realized it when we started setting up the buffet!

So I had my brother and sister-in-law run to the store and buy fifteen pounds of tortilla chips!!! They saved the day!  Kris and my cousins barbecued the meat on the spot so it went almost straight from the barbecues to the serving line. My cousins have blisters from chopping up so much meat for the taco bar! 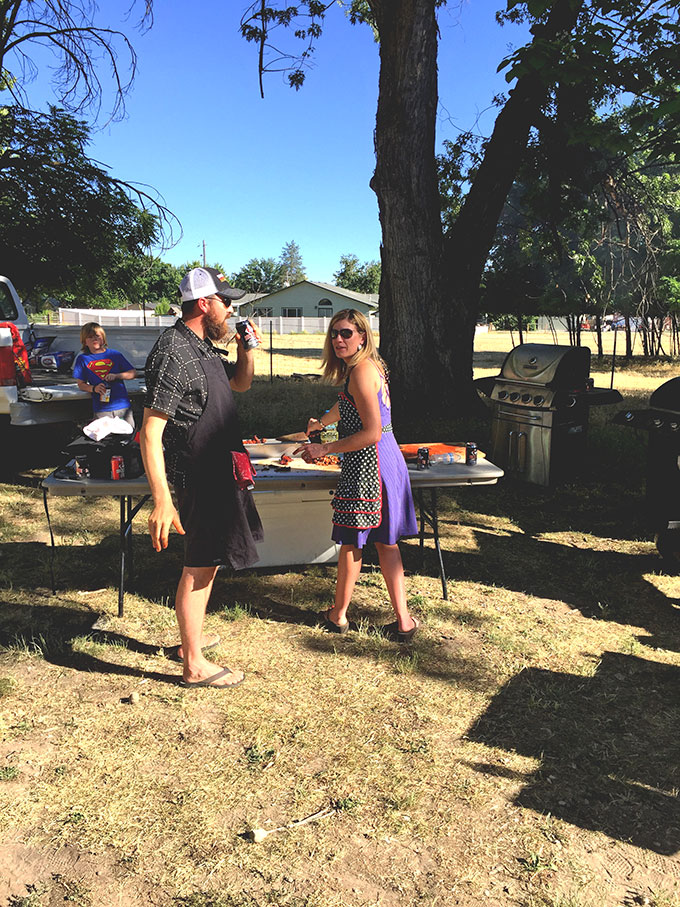 After pictures I ran around and tried to help with the taco bar as much as I could, but remember, I’m in my bridesmaid dress. Helping with barbecuing the meat was off limits and so was chopping the meat, so I ran back and forth between the buffet table, the barbecues, and the kitchen doing whatever needed to be done.

The kitchen was across the street from the barn, probably a few hundred feet away… I think I ran back and forth at least ten times…not even joking, I was jogging in my bridesmaid dress. And it was 95 degrees out!!! Luckily lots of trees and shade. 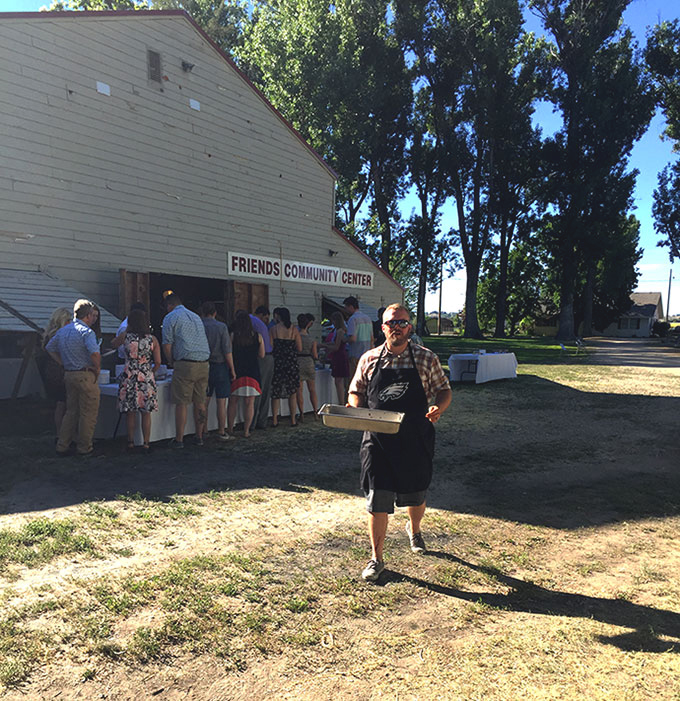 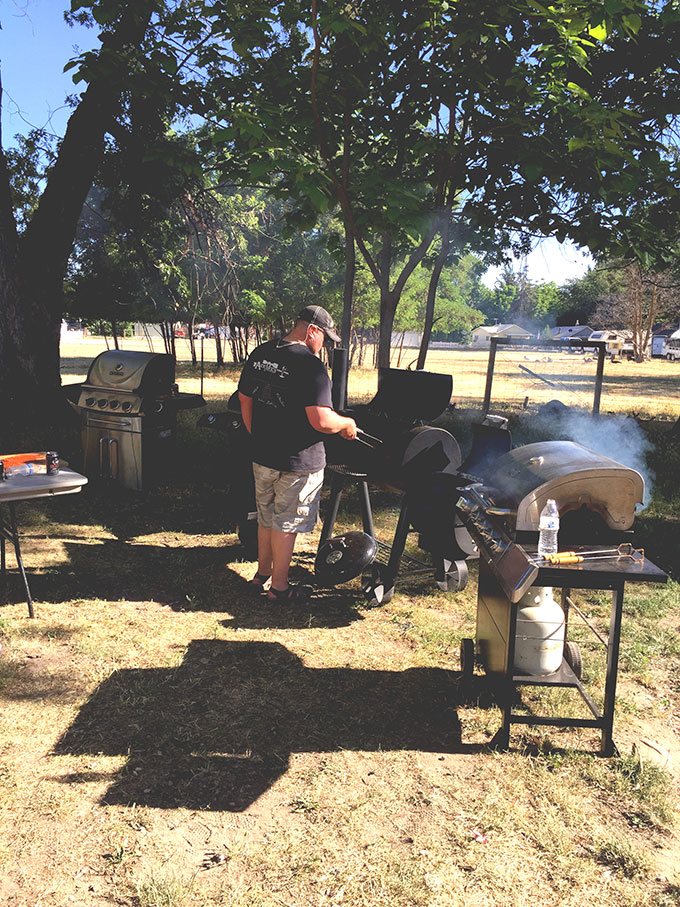 Then it was finally time for dinner! The wedding party went through the buffet line first. I proceed to stuff my face and down a can of wine (yes, canned wine, two glasses per can), and then I ran around trying to keep the buffet line stocked, well, actually I made my brother refill the taco bar for me.

Then dinner was over, the first dance, and then it was time for speeches, which was actually the most nerve-racking part of my wedding duties…some Coors Light real fast and I delivered my Maid of Honor speech. I think I finally relaxed after handing off the mic….. after speeches they cut the cake, threw the flowers, did the garter toss and socialized the rest of the night. 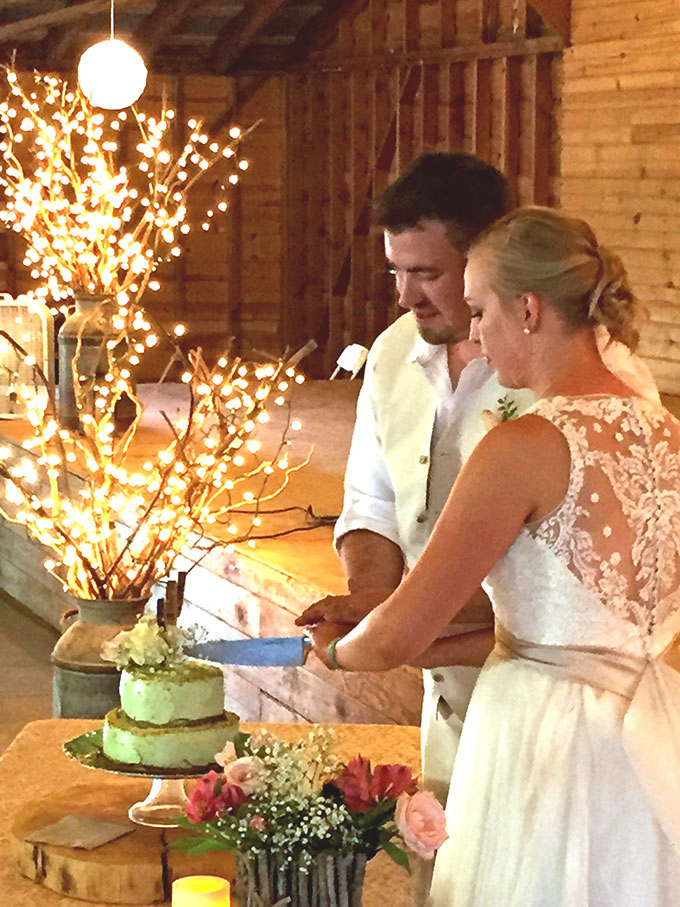 Overall it was a very fun wedding and I liked catering the food and making the cake. I should have been a little more organized with being the Maid of Honor though. We ended up with a fair amount of leftovers.  I think running out of food at a wedding is the worst thing ever so I planned on extra. Nikki and Jared had 130 people RSVP so I planned a taco for 150 people.  My best guess is that around 100 people showed up to the wedding.

If I did it again, I would plan just enough food for 130 people. I think I had too many toppings for the tacos as well; I should have just kept it simple with cheese, onions, jalapeños, radishes, sour cream, and cilantro. I don’t think I really needed the shredded lettuce, tomatoes, or guacamole.

I should have put the guacamole out with the chips and salsa during the cocktail hour and then not had any guac for the tacos. And finally, I should have set up the buffet line with beans and rice first, then the tortillas, followed by the meat and toppings.

In the end, everything worked out. Nikki and Jared are married and we successfully catered a wedding taco bar for 150 people! 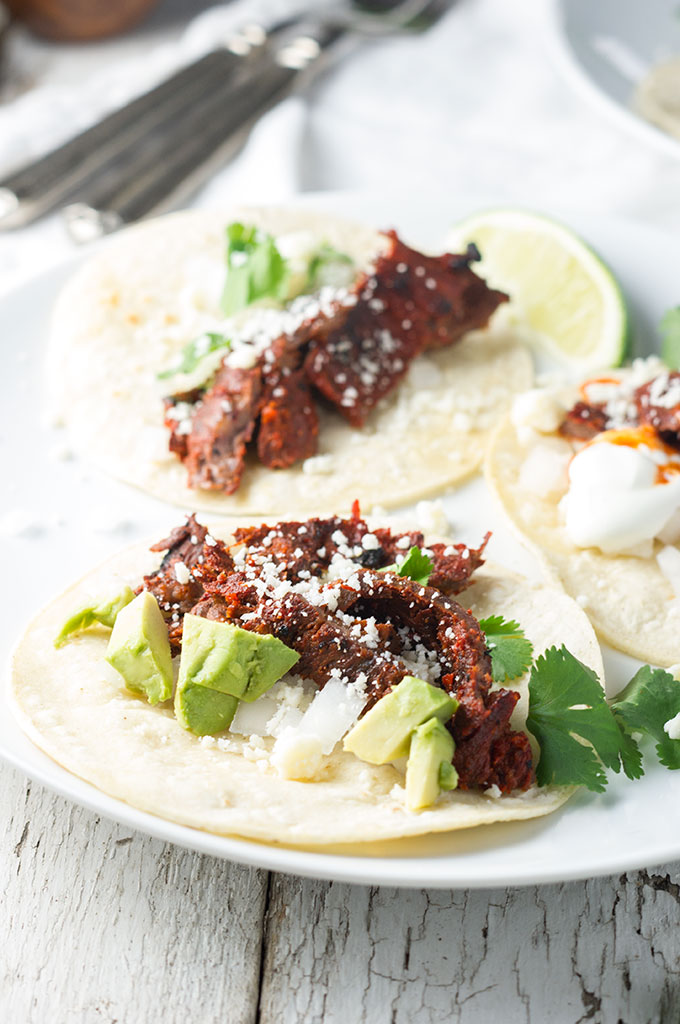 Below is a list of everything I bought, just in case you ever want to plan a wedding taco bar for 150 people! I did end up with leftovers and like I said earlier, I think there were about 100 people at the wedding.

Total price came to $6.15 per person for 150 people.  And you could certainly cut that price down if you used a cheaper cut of asada than we did.