Is it possible to eat too much zucchini?  I mean, seriously, can you overdo it?  I can’t stop eating these zucchini chips.  I’ve easily consumed at least one, if not two medium to large-ish sized zucchini.  I’ve made zucchini chips in the past but Cooking Light had zucchini chips in their last issue and their recipe is amazing. The key is to soak the zucchini in vinegar, olive oil, and any seasonings for at least 10 minutes prior to dehydrating them.  Genius!  I’ve been using apple cider vinegar and can’t get enough! 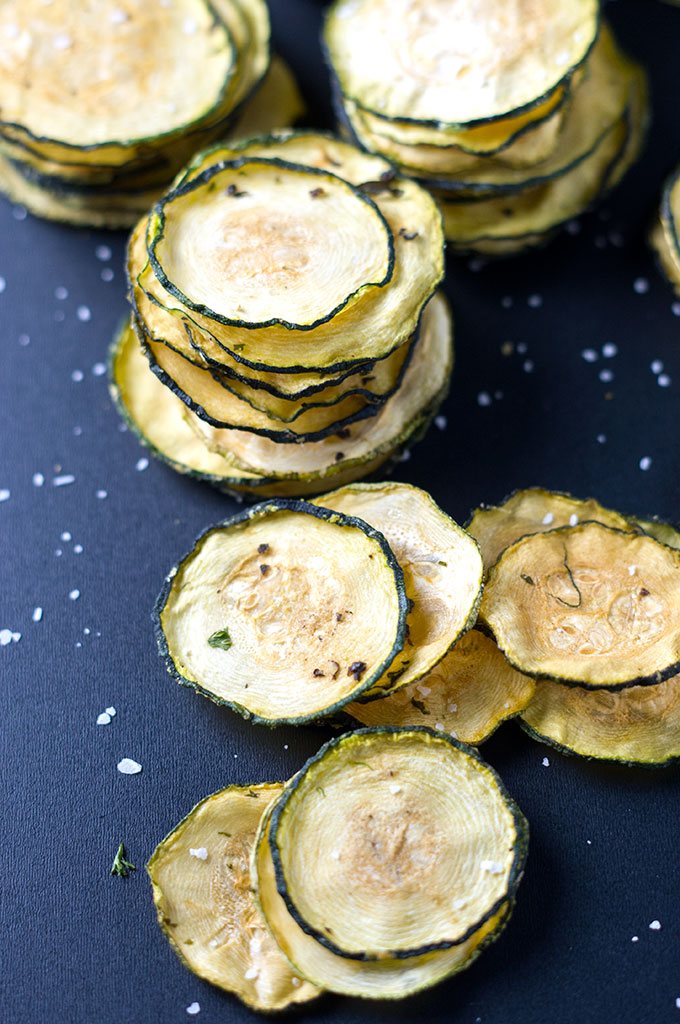 Here’s a link to the Cooking Light Sea Salt and Vinegar Zucchini Chips.  They use malt vinegar, which I don’t regularly keep on hand, so that’s why I went for apple cider vinegar.  I think just plain, original vinegar would work too.  I did sea salt and red pepper flakes the first time I made these.  I liked them but Kris said they had too much salt.  After than I’ve been doing a small amount of salt, pepper, and garlic powder. Maybe it’s the garlic powder that’s so addicting.  I’m very generous with the garlic powder…. 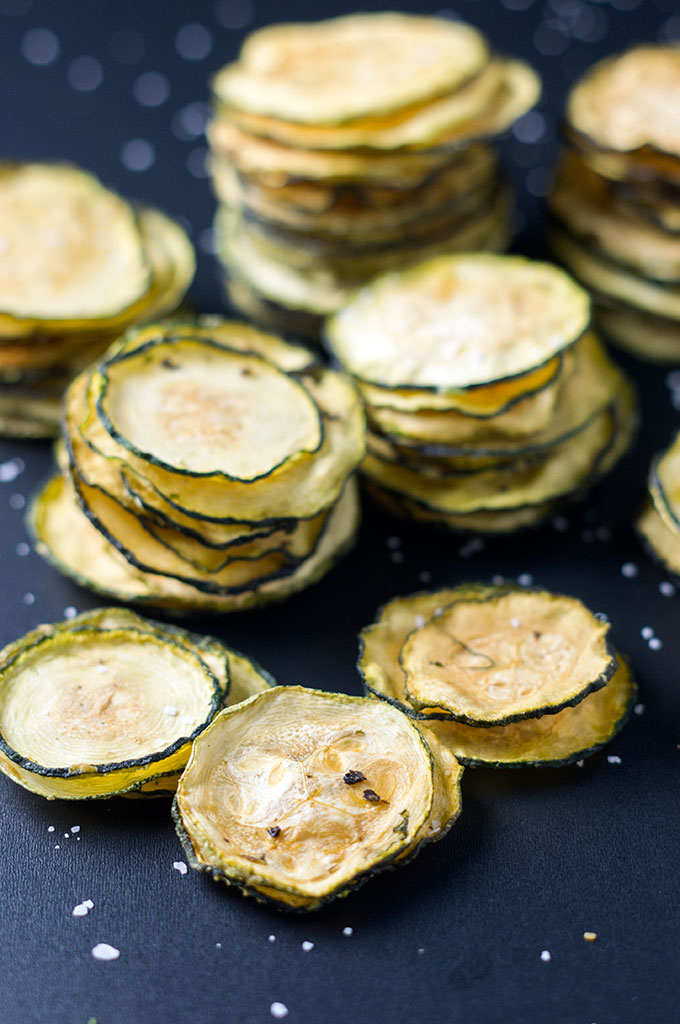 I baked these in the oven the first time I made them.  The Cooking Light recipes says to bake them at 200 degrees for 2-2.5 hours.  I think it took me over 4 hours for the zucchini to finally get dried out enough… maybe even close to 6 hours…I can’t remember exactly but however long it was, it was too long.  So I’ve been making them in the dehydrator since then.  I slice the zucchini 1/8 inch thick using my mandolin, soak the slices in vinegar, olive oil, salt, pepper, and garlic powder for 10 minutes and then place the zucchini slices on the dehydrator trays. I sliced the zucchini less than an 1/8 inch once to speed up the dehydrating process… don’t recommend doing that.  I didn’t watch them close enough and every single zucchini round stuck to the trays and made a huge mess! 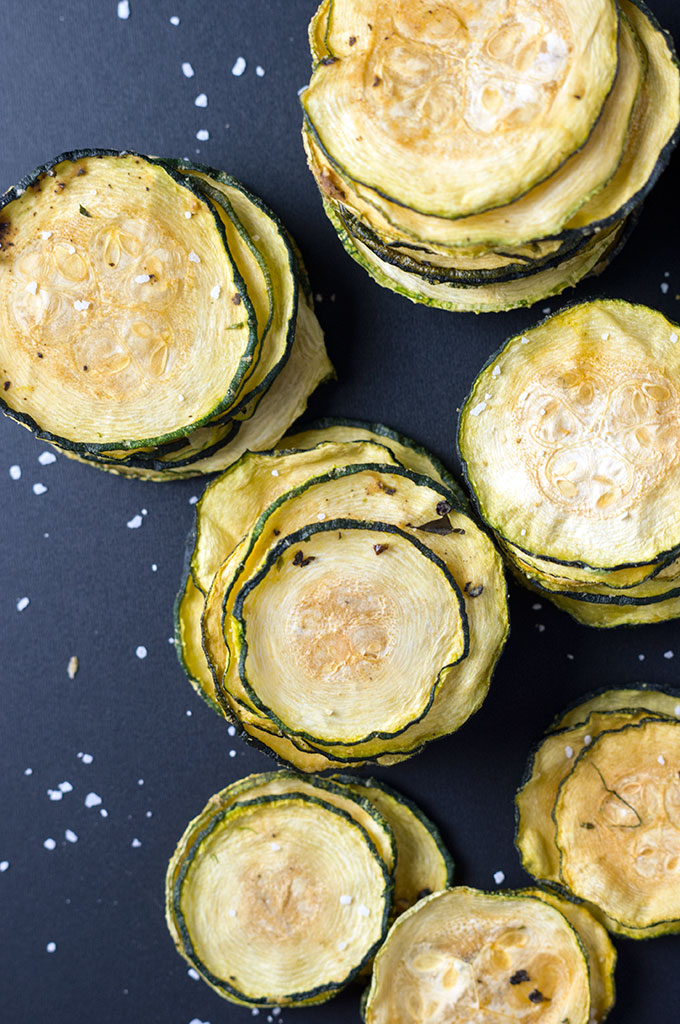 You can slice the zucchini by hand if you don’t have a mandolin and baking them in the oven does work, just be patient.  And watch the zucchini chips closely whether you use a dehydrator or the oven.  They can easily get overdone.  I know it seems like a lot of work to make zucchini chips but it’s so worth it!  They’re the perfect healthy snack and a great substitute for potato chips and crackers. 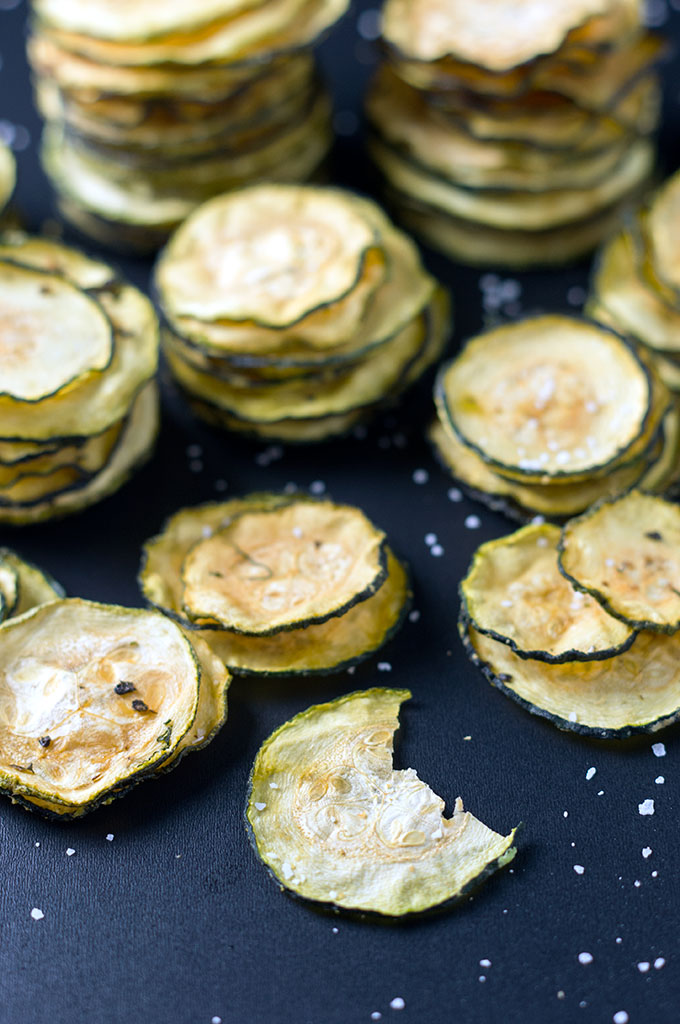 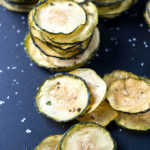